FNB Madibaz backline star Kyle Cyster believes their win over Central University of Technology in Monday’s FNB Varsity Cup rugby match was reward for the hard work they have put in this season.

The Nelson Mandela University side won their first fixture this year 36-26 at the Madibaz Stadium in Gqeberha, seizing the advantage when they blitzed their opponents with five tries in the first half to lead 33-14 at the break.

Although CUT came back strongly in the second half, Madibaz showed determination in defence to cling on to their lead for a much-needed win.

The 22-year-old Cyster was named the Player That Rocks and was at the forefront of the first half assault, crossing for a hat-trick of tries inside 27 minutes. 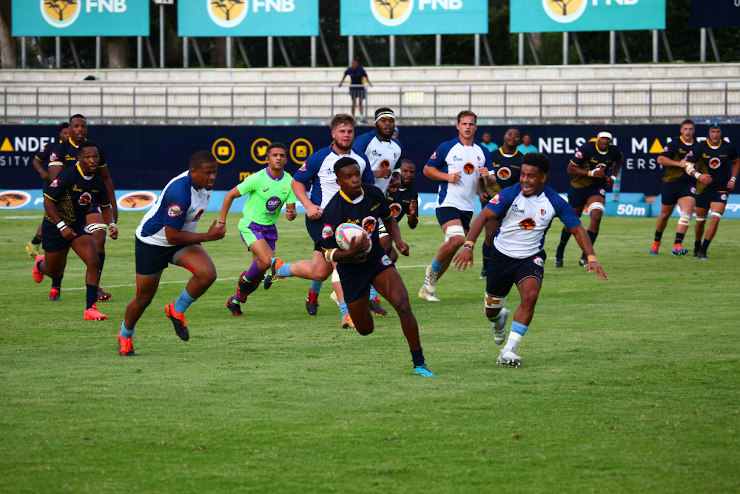 FNB Madibaz fullback Kyle Cyster goes on a run in their FNB Varsity Cup match against Central University of Technology at Madibaz Stadium in Gqeberha on Monday. Madibaz won 36-26 and Cyster, who scored three tries, was named the Player That Rocks. Photo: ASEM Engage

The fullback said they had “a great mentality going into the game and we all stuck to the plan our coach had”.

“Definitely, we deserved this win,” said Cyster, who is doing an advanced diploma in business studies.

“Week in and week out we have worked very hard in the training sessions, and we owed it to ourselves and the supporters.”

He added that it was important in the tough environment of the Varsity Cup to stay focused for the full 80 minutes.

“I think the biggest lesson the guys can take away from the game is that if you are committed 100 per cent to everything you do, you will end up getting a positive result.

“The result will also help our self-belief and the fact that we can become even better.”

Cyster, who grew up in Strand in the Western Cape, paid tribute to the support they had received from many quarters.

“I just want to say thank you to everyone who came out to support us and everyone who was watching the game at home.

“We do really appreciate it and believe that this sort of support will help us to continue to give our best going forward in this competition.”

Regarding his own performance, the fullback was at a loss for words.

“I actually couldn’t believe it,” he said afterwards.

“I’m still trying to process it, but it feels really special. This game was very important for us, so to contribute to the team with three tries really meant a lot.”

Cyster is relishing the challenge of the Varsity Cup after making his debut for Madibaz in the Varsity Shield in 2020.

“The experience so far has been amazing and it’s all thanks to my teammates and the coaching staff,” he said.

“We push each other to be better, not only on the field but off the field as well. It’s been really amazing to build a bond with this group of players.”

In the next round on Monday, Madibaz will play against UCT in Cape Town. Kick-off is at 7pm.