She was joined on the winner’s podium by North-West University’s Tristen Worth, who outlasted ex-Grey High pupil Gerard Mitchell 3-1 in a hard-fought men’s final.

Mitchell is now studying at University of Johannesburg and his position as runner-up was matched by UJ colleague Teagan Roux, who lost 3-0 to Ward.

The tournament was part of a series of events in South Africa acting as qualifiers for the World University Squash Championships in Egypt in November. 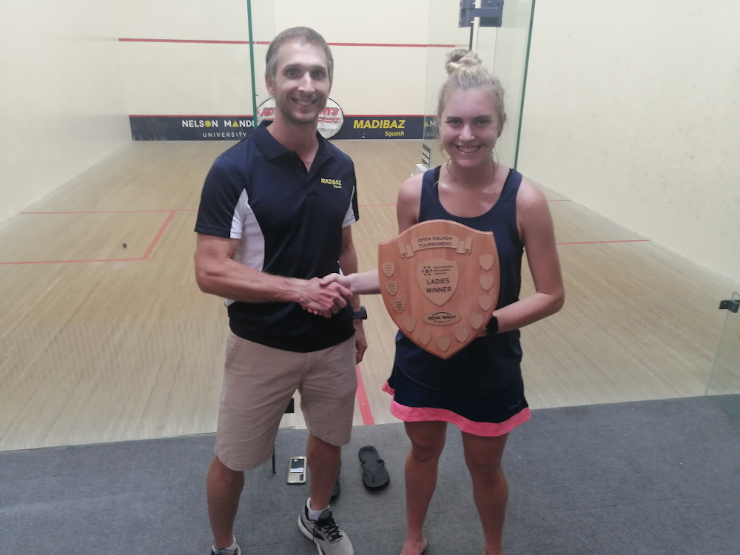 This resulted in entries from Stellenbosch, North-West, UP-Tuks and UJ students, adding the important element of variety for local players.

Ward, who is doing her articles to become a chartered accountant, said the quality of the field had made the tournament exceptionally competitive.

“There was a nice mix of players from around the country and that ensured there were some really tough matches during the weekend,” said the 24-year-old. “So to win it was the icing on the cake.”

Although triumphing 3-0 in 38 minutes, the Eastern Province number one, who won the Westview Open last month, was made to work until the very end.

The second game went down to the wire with Ward taking it 13-11 and, although shooting ahead 10-4 in the third, Roux refused to concede.

In a remarkable sequence, she levelled the game at 10-10 before Ward regrouped to win it 12-10.

“Yes, it got quite intense in the third game very quickly,” acknowledged Ward. “At 10-10, I just decided to concentrate on going back to my gameplan and to stick to the basics, rather than rushing it, and I was happy to achieve that and finish it off.

“It is always a very hard match against Teagan because she is an extremely solid player and I knew I had to concentrate on making sure I kept a good length throughout.”

Worth and Mitchell, whose match lasted 55 minutes, also became involved in a marathon second game, which the latter won 19-17.

“This was a real quality tournament and I had to push hard against Gerard to take the win,” the 19-year-old said.

“It was the first time I played in this event and I am very pleased to take the win because my goal is to try to make the USSA team for the World University Championships.”

Squash manager Theresa le Roux applauded the club members for their hard work in a short space of time to ensure the tournament’s success.

“We will definitely host it again next year, but will try to source sponsorship to make it an even bigger and more elite event.”