FNB Madibaz wing Khakalethu Bophi is relishing the prospect of playing in front of his home crowd when they take on UP-Tuks in their next FNB Varsity Cup rugby fixture on Monday.

The 23-year-old backline player, affectionately known by his teammates as Flash, is fresh from scoring two tries in this week’s first game against Wits, which the Nelson Mandela University side lost 31-20.

Bophi, who made his Varsity Cup debut against NWU-Pukke last year, admitted next week’s clash at the Madibaz Stadium would be a tough challenge against one of the powerhouses of the competition. 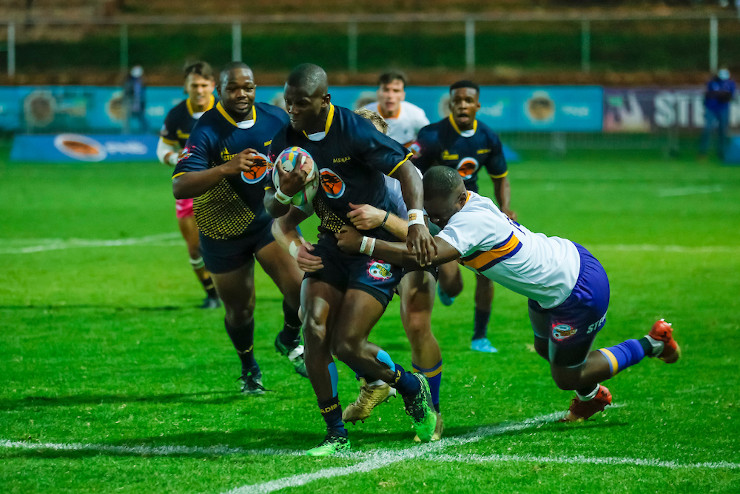 “But, yeah, the boys are ready for the Tuks game, and we are looking forward to playing at home with our crowd supporting us,” he said.

“It will be a lot different from last year when we competed in a bio-bubble. From playing in that environment to experiencing a stadium filled with spectators makes a huge difference.”

He said he found that Varsity Cup rugby was extremely quick and physical, which made it “a special moment” to cross the line twice against Wits.

“The team worked very hard to get the ball to me as quick as possible to score a brace in the corner last night (Monday),” the final year business management student said.

“I was obviously very happy to contribute to the team, although it’s sad that we lost the game. But what mattered most is that we fought until the end.

“I feel like there were many positives from the game against Wits, but we learnt that we have to still work a bit more off the ball.”

Bophi, who grew up in King William’s Town (now Qonce) where he attended De Vos Malan High School, said his Varsity Cup rugby journey almost didn’t happen after he received an athletics bursary from Nelson Mandela University due to his sprinting prowess.

“Although I started playing rugby when I was seven, the first challenge was to choose between athletics and rugby,” admitted the speedster.

“But because I got a bursary for athletics when I was in matric, I chose athletics. Then I realised that, while I was doing athletics, I still loved rugby.

“I started playing Res League for fun and then during the Covid lockdown I decided to gym and changed my programmes from athletics to rugby.

“I worked so hard that when we got back to varsity and I received a call to join the Madibaz rugby side, it was easier because of the fitness work I had done.”

Having had his passion for the game ignited when he represented Border U17 in a sevens tournament in Paarl in 2015, his career developed further in the Res League.

“One of my highlights was winning the Res League two years in a row. That was when I caught the eye of the Madibaz coaches and received a call to play in a trial for the Varsity Cup team.”

Bophi said his approach to life, and rugby, was to keep his feet on the ground.

“I believe that staying humble and working hard when no one is watching are very important and this has contributed to my success.”

It’s an attitude he will continue to apply to his rugby as he prepares for one of Varsity Cup’s toughest examinations on Monday.