A decision by the coaching staff to promote Mark Amm to opening batsman for the Varsity Cricket tournament in Potchefstroom paid dividends when the swashbuckling Madibaz allrounder was named in the “all-star” team afterwards.

The 22-year-old Nelson Mandela University player has traditionally batted in the middle-order but accepted the challenge set by coach Lefa Mosena for the Twenty20 event.

Amm explained that the coach had promoted him to the top of the order for some warm-up matches. 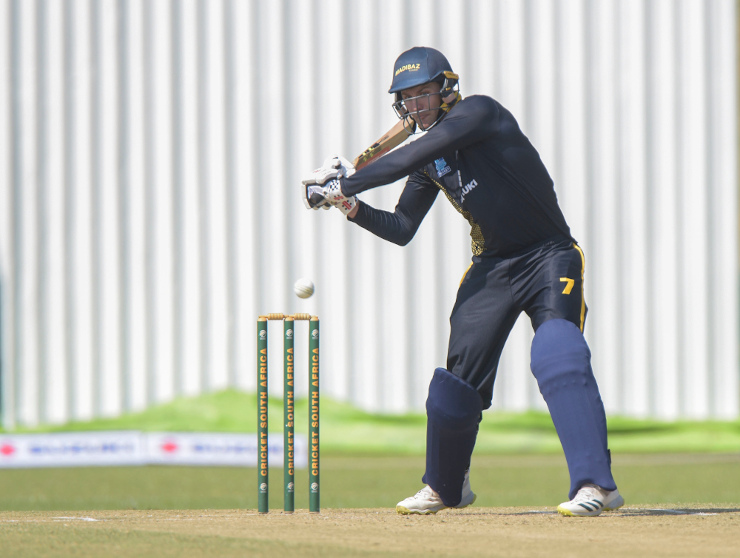 Madibaz opening batsman Mark Amm hits out during their match against UP-Tuks in the recent Varsity Cricket tournament in Potchefstroom. Amm was included in the team of the tournament at the end of the competition. Photo: Catherine Kotze/Varsity Sports

“It actually worked well and I was able to gain the necessary confidence,” said the fourth-year education student.

“In Potch, I looked to bat positively and took the bowlers on, especially in the power plays. We played on great batting wickets, which allowed me to express myself.”

Amm, who also bowls offspinners, started the tournament with a knock of 58 off 42 balls as they chased down UCT’s target of 136.

After modest contributions in the next two games, he hit his straps against University of Johannesburg, taking 2/23 in their innings of 133 and then smashing 78 off 37 balls to guide Madibaz to a comfortable five-wicket win.

Being named in the team of the tournament was an honour, he said, particularly after the dearth of varsity competition because of the pandemic.

“I was lucky enough to make my debut for Madibaz in my first year in 2019,” said the former Graeme College pupil. “I played the Varsity Cricket and USSA tournaments that year but we did not play for most of my second and third years.”

He said he was proud of his inclusion after his eye-catching performances.

“I have always enjoyed the T20 format and have worked hard on my batting as a ‘power hitter’ up front.”

Amm grew up in Makhanda and is the son of the late Philip Amm, who was an integral member of the successful Eastern Province cricket team in the late 1980s and early 1990s.

He recalled some wise words from his father when he was brought down to earth with a bang as a young player.

“I have grown up in a cricketing family and I developed a passion for the game very early in my life,” said Amm, who is also a highly rated tennis player.

“I played in all the A teams at school level, but what vividly stands out for me is the first time I made a duck.

“It was on a concrete pitch against Lorraine Primary in Gqeberha and I felt as though my world had come to an end.

“But I put it into perspective with my father’s words – ‘that is going to be the first of many and one day you will have a whole farm of ducks’.”

He enjoys the dual role with bat and ball but has also adopted a level-headed approach to his sport.

“My motto in sport has always been to enjoy what I do, albeit on the cricket pitch, tennis court or rugby field,” said Amm.

“I always do my best, no matter what the situation. I like to think I have a good temperament and have learnt to always respect my fellow sportsmen.”

This has led to a series of highlights during his young life, including captaining Graeme for two years (2017 and 2018) and representing the EP U18 schools team.

“I was awarded honours for cricket in my Grade 12 year and also received my 100th cap for playing more than 100 games for the first team.

“But my success at the recent Varsity Cricket event and being chosen for the tournament team at the end is undoubtedly one of the biggest successes in my career.”