Madibaz cricketer Tristan Stubbs seized the moment when he steered South Africa A to victory in his Twenty20 debut in Zimbabwe yesterday.

The 21-year-old hard-hitting batsman scored 39 not out off 37 balls as his team surpassed the Zimbabwean XI’s 114 all out with 14 deliveries to spare.

Stubbs was recently named in the squad for the five-match series, which followed three One-Day Internationals last week.

The final-year B.Com student at Nelson Mandela University hit his way into recognition for higher honours with sensational performances in the CSA T20 Challenge in Gqeberha in February. 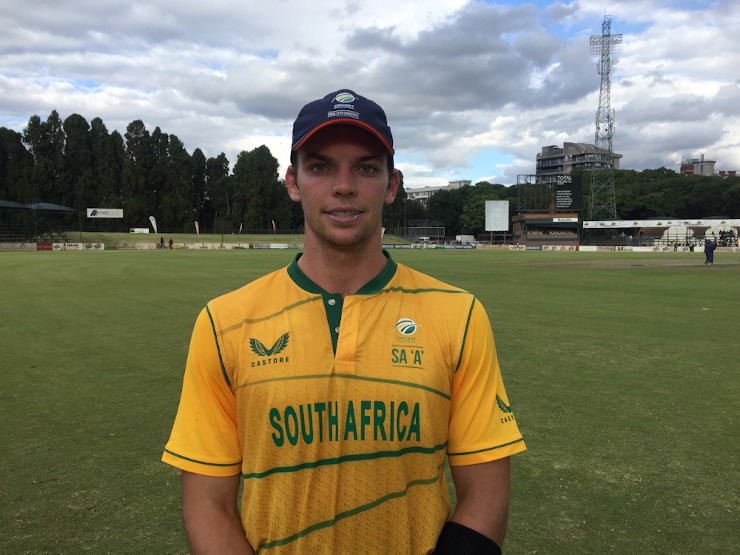 Hard-hitting Madibaz batsman Tristan Stubbs has made an immediate impact for South Africa A in their five-match Twenty20 cricket series against a Zimbabwe XI. Photo: Supplied

He notched up three half-centuries for the Warriors, including successive innings of 80 off 31 balls against the Dolphins and 65 off 35 deliveries against the Knights.

It’s no surprise that the T20 Challenge is a career highlight.

“That was a great experience and although we, as a team, did not do that well, it was nice to be second on the list of leading run-scorers,” he said.

“I try to adapt to each format and I really do enjoy red-ball cricket but, as of right now, I would have to say T20 is my favourite.”

Stubbs said that although his selection for the national outfit had been a surprise, he felt it was just reward for hard work and several eye-catching performances.

“This has been my first full season in provincial cricket so it was nice to play a number of games,” said the allrounder, who has represented Eastern Province and the Warriors franchise in all three formats.

“I was consistent in the Twenty20 matches and that probably helped to build a case for the selectors to pick me.”

Now, having received a chance to compete at the next level, he wants to grab the opportunity with both hands.

“My goal at the moment is just to make it count,” said Stubbs.

“And then, in the long-term, it is just to make sure I keep enjoying my cricket. So I am keeping everything very simple.”

The allrounder, who attended Knysna Primary School before matriculating from Grey High in Gqeberha, has had a passion for ball sports as long as he can remember.

“It didn’t have to be a cricket ball; I just remember playing with any type of ball with my dad in the garden when I was a kid,” he said.

As his game developed over the years it became evident that batting was his forté.

“I feel I have the ability to hit sixes, which obviously suits the T20 format, but also to rotate the strike.

“While that went well this season, I also know I have work to do in the red-ball game when it comes to the mental demands of patience and concentration. And I also want to improve my bowling.”

From his parents to coaches, Stubbs has had a strong support base during his short career.

“My parents have always been there to support me and then coaches such as Michael Smith [at Grey High School] helped my batting and Robin Peterson [at the Warriors] gave me the opportunities at domestic level and backs me by allowing me to play with so much freedom,” he said.