Scrumhalf Anovuyo Moyikwa said the FNB Madibaz were determined to finish their first FNB Varsity Cup campaign in a number of seasons on a high note when they play Free State University in Gqeberha on Monday.

The Nelson Mandela University outfit have endured a tough programme against the country’s top varsities and will return to the Varsity Shield competition next year.

Moyikwa, who crossed for one of the team’s three tries in their 61-21 loss to Stellenbosch on Monday, acknowledged that their last game against Shimlas at the Madibaz Stadium would be another demanding challenge.

The Free State side are top of the log but Madibaz have been fighting hard all season and Moyikwa says it will be no different on Monday. 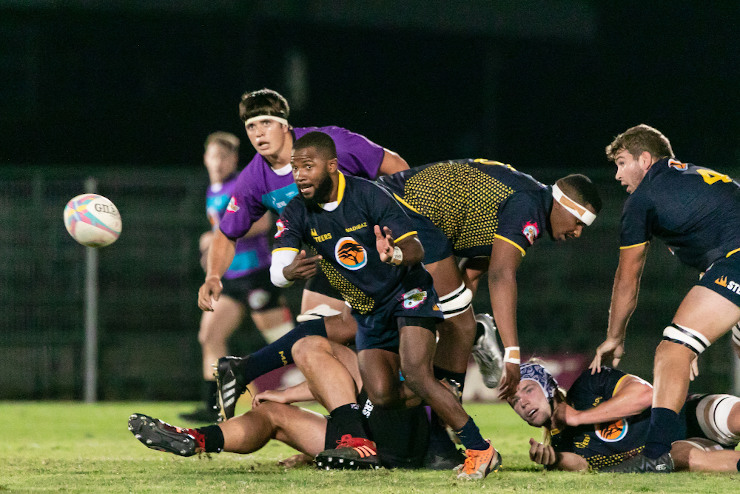 Anovuyo Moyikwa says they are determined to finish on a high note when they play Free State University in their final FNB Varsity Cup rugby match of the season at the Madibaz Stadium in Gqeberha on Monday. Photo: ASEM Engage

“We understand this will be a serious test, but the mood in our camp is that we are determined to finish the season on a high in front of our home crowd,” the 24-year-old business student said.

He was happy to get across the whitewash in the game in Stellenbosch, with the other tries coming from flank and captain Arnouw Nel and wing Jade Stoffels.

“The game against Maties was extremely tough as they are a champion side,” said Moyikwa. “I was delighted to score a try and contribute to my team’s cause.

“I am always happy to contribute in whatever capacity I’m needed.”

Moyikwa attended Moregrove Primary before finishing his schooling at Grey High and debuting for Madibaz this season.

He said it had been a steep learning curve, both for him and his teammates.

“The experience of playing Varsity Cup has been invaluable because of the strong competition you constantly face,” he said.

“I think one of the main lessons I’ve learnt is how demanding rugby can be at such a high level and although it’s been a testing season, I can honestly say I’ve enjoyed every minute of it.

“One of the big things which has stood out for me is that in the Varsity Cup even the smallest of margins make the biggest of differences in the end.

“That means you have to keep your concentration for the full 80 minutes because one slip-up puts you on the back foot.”

From a team point of view, he said he appreciated the attitude of the squad.

“A big area for us was staying in the fight no matter what the situation was and we felt that we did that.

“What we can improve on is to be more accurate in soft moments in the game and not allow our opponents to seize the advantage in those situations.”