SPAR Madibaz netball coach Lana Krige wants her senior players to set the tone when the demanding Varsity Netball competition gets underway in Pretoria this weekend.

The Nelson Mandela University outfit open their programme with a testing list of fixtures, including matches against UP-Tuks, UJ and North-West.

Although she is relying on the more experienced players to lead the way, Krige said that it would be up to the entire squad to turn it into a successful campaign.

“I believe that a team can always do well when the senior players lead by example and the younger members play to their full potential,” she said. 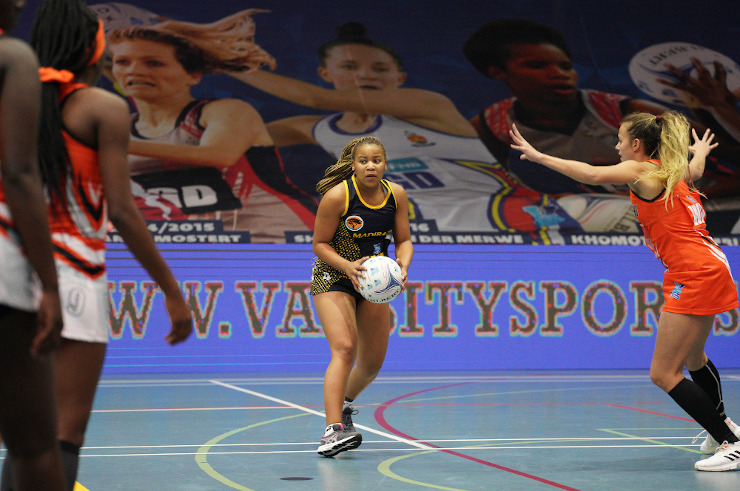 SPAR Madibaz star Siphosethu Kilani, with the ball, will be one of the squad’s key players when they begin their Varsity Netball campaign in Pretoria this weekend. The Nelson Mandela University team play their first match against UP-Tuks on Saturday. Photo: Varsity Sport

“We are really looking forward to some creative play from someone such as Siphosethu Kilani combined with accurate shooting and two-hand interceptions from our defence.”

She added that they had lost a number of senior players, including former captain Jeanie Steyn.

Bianca Blom is, however, back in the fold while Juanita van Tonder and Mothira Mohammad remain from last year’s starting line-up, according to Krige.

“To back them up we have a number of new faces in the squad and I’m looking forward to seeing them in action on a bigger stage.”

Their build-up to the competition was slightly compromised due to a number of injuries within the squad, she explained.

“Our prep has been very interesting because we had to manage injuries while trying to get everyone ready to take the court again.

“It was really a mixture of rehabilitation and working on controlled skills, coupled with situational play exercises in which most players could participate.”

She noted that their focus had been on the processes they needed to execute rather than placing a huge emphasis on the upcoming matches.

Although the players were excited, Krige said the reality of the task ahead would kick in this week.

“Madibaz have not been in the semifinals for a couple of years and that is a big goal for us.

“The team feed off the shooters and if they are playing well I feel the team can do well.”

Krige tempered this by acknowledging the growth of netball in South Africa.

“Due to the sport’s structure in this country, our universities are now all very strong,” she said.

“Maties, Free State, UJ and North-West are formidable opponents and players from Tuks and UWC excelled at the nationals so this will obviously make for an extremely well-contested tournament.”

Matches will be broadcast live on SuperSport Variety 4 (channel 204).