Three Madibaz karatekas have earned selection for the South African squad to take part in the World Open Championships in Japan later this year.

Senseis Gcobani Maxama and Lwazi Finca, along with Yongama Booi, will compete in the world event in Tokyo from November 22 to 24.

Booi will be making her national debut, while both Maxama and Finca have previously earned national colours. 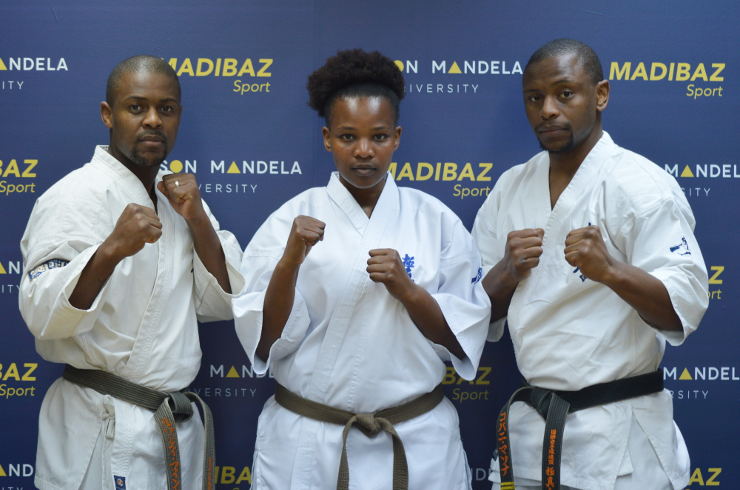 Madibaz karatekas (from left) Lwazi Finca, Yongama Booi and Gcobani Maxama have been selected for the South African squad to compete in the World Open Championships in Japan from November 22 to 24. Photo: Brittany Blaauw

Madibaz Sport karate manager Bernard Petersen said it was a milestone for Nelson Mandela University because karate had many styles which were catered for in various world events.

“Kyokushin is different to other styles as it is full contact and there have hardly been any opportunities for these karatekas to compete internationally because of the nature of the style.

“We at the university are very proud of their achievements. They have proved to be successful despite facing many challenges.”

He added that the trio had been involved in a number of tournaments since last year to make an impression.

“They had to participate in four different tournaments and they made their mark at each one,” he said.

“Sensei Maxama won two of the four tournaments and came third in another one, while sensei Finca participated in all the tournaments, finishing in the top eight.

“Senpai Booi was second in the SA championships.”

Preparing to compete in the open weight champs against formidable opposition from countries such as Japan, Russia and Brazil, Petersen said the trio were working a lot on body conditioning, strength and stamina training.