The SPAR Madibaz team made a fine start to the Varsity Netball tournament when they defeated University of Johannesburg (UJ) in their opening match in Johannesburg on Monday.

UJ were behind from early in the match and they could not make up the deficit as the Eastern Cape side won 58-50. 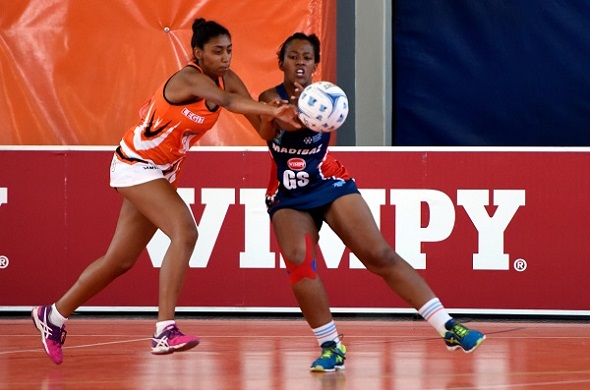 UJ’s Jodie Brown of University of Johannesburg and Hlumisa Sithonga of SPAR Madibaz tussle for possession during round one of the Varsity Netball tournament. Photo: Catherine Kotze

Although UJ lost, they did earn a bonus point for accumulating 50 points.

University of Pretoria (Tuks) also started well with a comprehensive 62-41 drubbing of University of the Free State (Kovsies) in Bloemfontein.

The teams were evenly matched for much of the game before Tuks took control midway through the last quarter to hand Kovsies their biggest defeat in the history of the competition.

The Western Cape side dominated possession, goal percentages and rebounds in the game.

Despite fervent support from the home crowd, Stellenbosch University (Maties) went down 42-32 to defending champions NWU-Pukke.