Versatile Gqeberha rugby player Kyle Cyster was named player of the tournament in Division A at the recent University Sport South Africa week, but acknowledged the role of his teammates in earning that accolade.

The 22-year-old, who can play fullback or wing, was one of the key members of the Nelson Mandela University outfit in Pretoria, where they defeated University of Western Cape, but lost to Wits and Free State Shimlas.

Playing on the wing, the Madibaz star scored four tries in those three matches, including a hat-trick in the opening game against Wits, and said he was pleased with his form.

“It was really very special for me because I had an injury earlier this year and wasn’t sure if I would be able to show the same form that I did in the Varsity Cup,” said Cyster, who is busy with an advanced diploma in business studies. 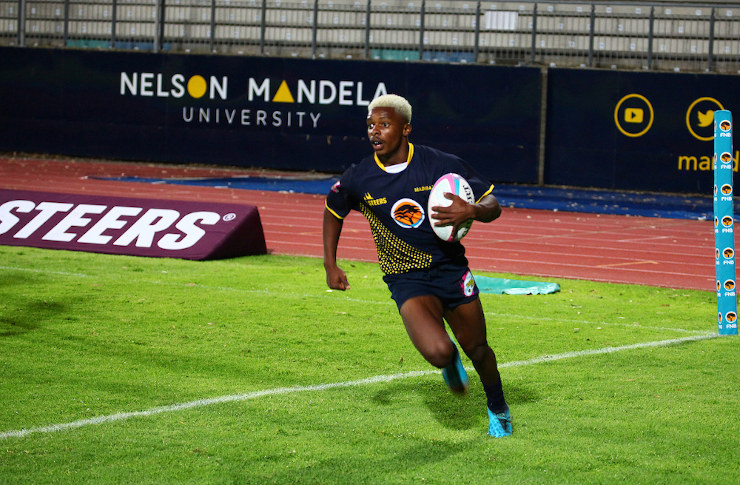 Madibaz utility back Kyle Cyster was named player of the tournament in Division A at the University Sport SA rugby week in Pretoria earlier this month. Photo: Varsity Cup

“But luckily I pulled through and played to the best of my ability.

“However, I would not have achieved any of this if it weren’t for my teammates so I am very grateful to them all for their efforts during the week.

“I really appreciate the work Madibaz rugby has been putting in for us as a team and this achievement was very satisfying for me.”

Cyster, who also scored a hat-trick in the Varsity Cup in March when they beat Central University of Technology, felt that the Madibaz players had improved as a team this season.

“Besides my personal performances, I am happy with the team as a whole as we have grown since the Varsity Cup.

“We have become very close to one another and we knew what our goals were in Pretoria.

“The match against Wits was very close and a few errors at the wrong time saw us lose by five points.

“Against UWC we played really well as a team and went in with a better mindset.

“In the Shimlas game we had lost some players to injuries and were not able to match them.”

The utility back, from Strand in the Western Cape, said his best memories of rugby had come with Madibaz, because he only started playing the sport in Grade 8 when he went to Hottentots-Holland High School.

“Before that I played only soccer, but I started enjoying rugby, even though I wasn’t that good at first,” he said.

“I made lots of friends through the sport and was able to bond with different people and coaches. Working in a group, as you must do in rugby, also helped me to become a better person.

“Madibaz is the first club I have been with for any length of time and my teammates are very close to my heart – they are more like brothers than just friends.”

Cyster, who has played for the EP U20 team, said another source of inspiration was making his parents happy.

“I love it when I can make them proud and put a smile on their faces when I do perform well,” he said. “So that’s all the motivation I need to play my best.”

His main focus now is to try to help Madibaz excel in the EP Grand Challenge competition, while his long-term aims are to give back to society.

“I want to make the most of my rugby career, but also want to help people back home.

“It is not easy to make it from the area where I come from because you don’t always get the opportunities, but I want to try to help the people of that community in any way I can.”