The triumph of the Madibaz women’s squad in the Currie Cup water polo tournament was bigger than just claiming a maiden national title, according to coach Delaine Mentoor.

It broke new ground for women as they became the first all-female unit to be crowned South African champions after defeating UCT 13-6 in the final at the Joan Harrison Swimming Pool in East London last week.

Mentoor said the Nelson Mandela University team, who are overseen by a female management team, “came together” to lift the trophy despite the odds being stacked against them.

“I can’t put our success into words really. We knew it was never going to be easy, but we were up for the challenge.” 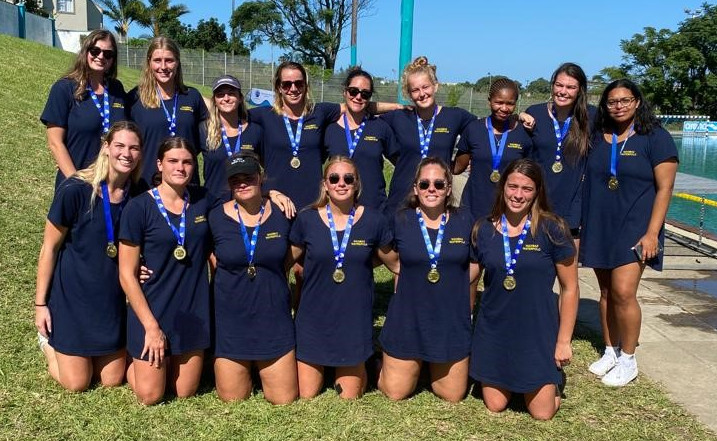 They grew stronger as a team throughout, she said.

“To rise above our loss against UCT in the pool stages and to attain the little goals we had set for ourselves, going on to win the tournament as an all-female side, made the victory not just about us.”

Mentoor, who is also the national women’s coach, said the victory was proof that their hard work and determination had paid off after placing fourth last year.

“Our approach was to make sure that we executed the things we do well to the best of our ability, regardless of who we were playing.

“Those efforts, along with sticking to the gameplan, adapting where necessary and working as a team, were behind our success.”

Ahead of the final, her message to the girls was simply to enjoy themselves.

“All I wanted was for them to bring everything we had worked towards in each game into the final. I wanted them to feel no fear and to enjoy every second.

“I knew it was going to be tough and so did the players,” she said. “I also knew that we were going to make it extremely hard for UCT to beat us.

“We wanted to play better than our performance against them in the pool game.”

An indication of their focus in the final was that they did not look at the scoreboard at any point, according to Mentoor.

“I kept reminding them to not look at the score, so I didn’t. I only felt we had a chance to win when the bell went for the final minute.

“We kept our energy, awareness and focus all the way until the final whistle.”

Mentoor said her best memory was seeing the team come together as a unit in the pool games and then watching them gel completely in the knockout stages.

“Every win was a key moment as our pool was really good. The results for all the teams were so unpredictable that you could not be complacent at any point.”

Madibaz Sport water polo manager Melinda Goosen said their success meant a lot for the sport at the varsity.

“This performance and result have been a long time coming,” she said. “I have been manager of this code since 2010 and I could not be prouder than I am now.

“To become the national champions takes extreme resilience and dedication, and to do it as an all-female team is the absolute icing on the cake.

“I cannot wait to see the future path of Madibaz water polo after this achievement.”