Madibaz rugby captain Arnouw Nel is relishing the opportunity of working with new coach David Manuel as they prepare for a challenging season when the Varsity Cup kicks off on Valentine’s Day.

There will be no love lost on either side when the Nelson Mandela University outfit open their programme with an away fixture against Wits in Johannesburg.

In the meantime, the Gqeberha side is working hard to ensure they are ready for their date with the Gautengers.

Manuel, a former professional player, took on his new post in November last year and the 21-year-old Nel said a good relationship had been established within the squad. 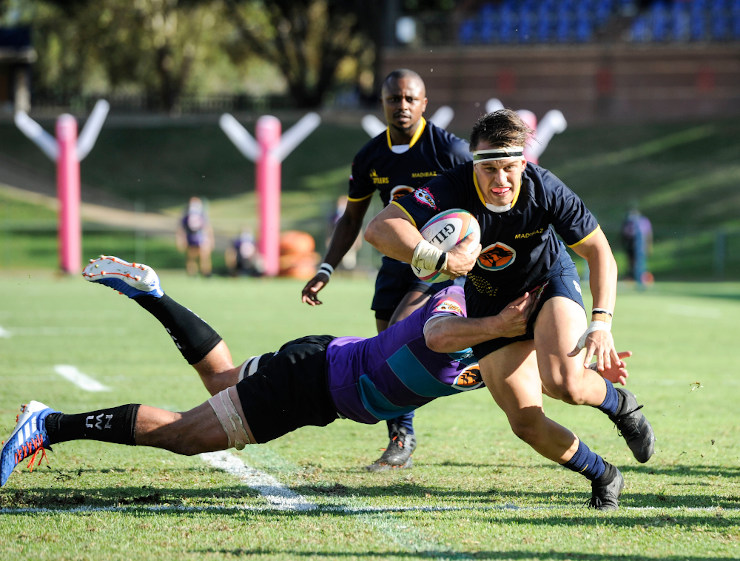 Madibaz rugby captain Arnouw Nel (with the ball) says the players are ready to embrace the challenge of competing in the Varsity Cup when the competition kicks off on February 14. Nelson Mandela University play Wits in Johannesburg in their opening game. Photo: Varsity Cup

“The coach has brought a sense of calmness to the team, focusing on the culture we want to create, along with the core values of team building, good foundations and good structures,” he said.

“I think coach David being appointed head coach was the best thing for Madibaz rugby and we are all looking forward to working with him this season.”

Nel, who plays openside flank, is also eagerly anticipating his role as the team leader.

“It is an honour and a privilege to be captain and a role that I look forward to as Nelson Mandela University has become a big part of my life,” said the human movement science student.

Nel, who grew up in Makhanda (then Grahamstown) where he attended Graeme College, said he had gained captaining experience with different teams at school level.

He is now ready to apply the lessons he has learnt during his fledgling career to the Varsity Cup tournament, but knows they are in for a serious examination.

“We understand that the Varsity Cup is a tough competition, but that is the reason that we play sport,” added Nel, who played for Eastern Province in the Craven Week and Currie Cup rugby for the EP U19 and U20 teams.

“We are ready to embrace the challenges which lie ahead and show that we can be competitive. It will be a case of taking it one step at a time and not looking any further than the next match,” said the newly appointed skipper.

“We want to prove ourselves in the competition starting next month and try to secure our place in the 2023 Varsity Cup. We know it will not be easy, and the systems and structures we have in place will be the key to our chances of success.

“The players have been hard at work for several months, both on and off the field, always giving 100 per cent, and we will be aiming to take that attitude into our Cup matches.”