NWU worked hard for their 1-0 Varsity Football win over a determined UWC side in front of an enthusiastic crowd in Mafikeng. 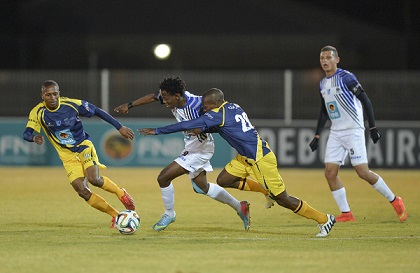 Although they will be happy with the three log points, NWU by no means had things all their own way as UWC showed they will be a force to be reckoned with this season.

NWU made a convincing start to the game as they pressed forward with purpose, testing the UWC defence which was without the calming presence of injured captain Cleo Popkas.

That translated into the opening goal as a clever ball into the box was turned home by Mogomotsi Molefe to give NWU an early 1-0 lead.

UWC managed to string together a few promising movements of their own, but NWU always looked threatening going forward in front of their vocal home crowd. The visitors grew in confidence towards the end of the first half, and did not allow the dangerous NWU forwards much space at all as they went into the half-time break with a slender 1-0 lead.

The start of the second half saw NWU pile on the pressure, and UWC goalkeeper Reon October had to be on top of his game to keep the lead at 1-0. The pace of the game started to catch up with the UWC side who were battling to deal with playing at altitude, but still managed to create a few good chances of their own.

The game opened up in the final stages as both sides pressed for a goal, but it was not to be as NWU held on for a tough victory in front of their expectant home crowd.

The third round of Varsity Football will roll out from August 4 in Bellville, Pretoria, Port Elizabeth and Mafikeng. With seven more weeks of non-stop and explosive football action to look forward to, get yourself down to games in your province to experience next week Monday’s excitement first hand. Matches commence at 4.45pm, 6pm and 7pm.