A superb defensive display by player of the match Kelly du Toit laid the foundation for the SPAR Madibaz’s first victory in this year’s Varsity Netball tournament.

The Nelson Mandela University team came away with a 53-38 result against the University of Western Cape in Potchefstroom on Monday to move clear of the bottom of the log.

The 19-year-old goalkeeper and goal defender is experiencing her first year in one of the country’s most prestigious competitions and has been quickly made aware of the tough challenges it presents.

“My experience so far has been really amazing and I have been learning a lot,” said the first-year social work student-athlete, who admitted that the event had been a revelation. “It is a whole different ball game to any other tournament I’ve played in.” 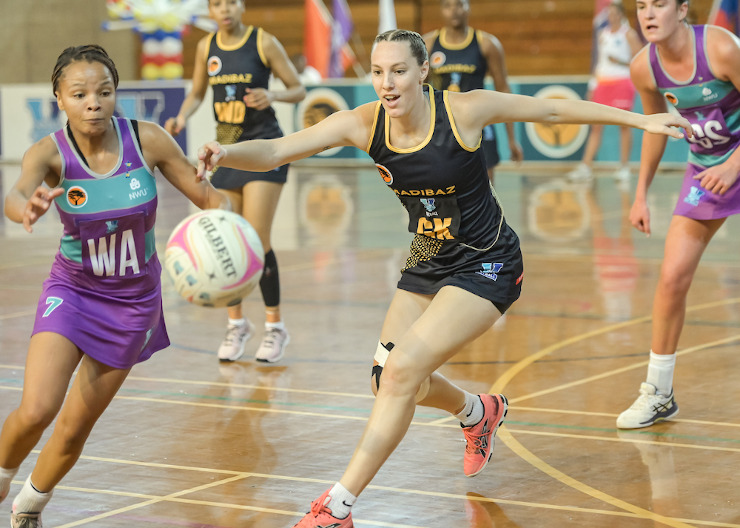 Gqeberha and SPAR Madibaz’s Kelly du Toit was named player of the match after their victory over the University of Western Cape in the Varsity Netball tournament in Potchefstroom earlier this week. Photo: Supplied

After a string of disappointments, the team were hungry to collect their first scalp in five outings.

“We started off well and we just gave it our all throughout the game,” said du Toit.

“Being named player of the match was unreal, but I wouldn’t have received this award if it weren’t for my teammates.”

Du Toit, who grew up in Kraaifontein in Cape Town before moving to Gqeberha, said it was rewarding to finally land a win after some difficult encounters against the competition’s best teams.

“It was a result of the hard work we have put in. We followed the coaching plan and executed accordingly,” she noted.

“However, the main thing was the positive mindset we took into the game.”

Although it wasn’t a faultless performance, the players pulled together and grew as a unit with every passing quarter.

“We finally gelled as a team and played for each other and were able to improve the things we did wrong,” said Du Toit.

She said they would strive to apply what they had learnt in their remaining matches against Stellenbosch and the Tshwane University of Technology in Bloemfontein on Sunday and Monday.

“We know we must follow the coach’s instructions and use the short passes which worked for us in the game against UWC. We shouldn’t try to run with every ball.”

She said it was also important not to get sucked in to playing their opponents’ game.

“Instead, we must stick to our gameplan and work together accordingly.”

Against UWC, Madibaz seized the initiative from the outset to sprint into a 21-9 lead after the first quarter en route to maintaining their unbeaten record against the Capetonians.

“We were very excited about our defence clicking today and I think we showed a lot more patience in holding onto the ball,” said coach Lana Krige.

“We were more clinical with our feeds into the circle and it wasn’t a case of hit and miss.”