The University of Johannesburg (UJ) reached the Varsity Football final following a penalty shoot-out when their semi-final against Central University of Technology (CUT) ended in a 1-1 draw in Bloemfontein last night.

They will meet Tshwane University of Technology (TUT) in the final in Tshwane on September 22. 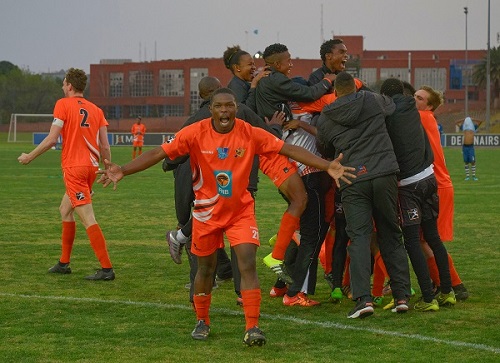 Sbongeleni Gamede of UJ celebrates after they qualified for the Varsity Football final in Bloemfontein last night. Photo: Saspa

The home side opened the scoring when they were awarded a penalty after UJ’s Sbongeleni Gamede committed an infringement. Tshepo Tshikare stepped up to fire the ball into the net.

UJ put the ball into the net for what seemed to be the equaliser by Dane Fortuin from a free kick, but the goal was disallowed because of offsides.

Against the run of play, UJ player Sbongeleni Gamede set up substitute Tshepo Tolo, who equalised through a deflection that looped over the keeper’s head into the goals.

CUT’s Taole Rakgomo could have killed off the game, but his shot was blocked in the box and the match went to a shoot-out.

After a tense battle, UJ goalkeeper Mpumelelo Motsoahole dived to his right to save CUT’s fifth penalty, sending his team-mates into ecstasy as they progressed to the final 4-3 on penalties.

TUT qualified for their second final in a row, also winning 4-3 in a penalty shoot-out against NWU-Mafikeng at the TUT stadium.

The match was deadlocked at locked at 0-0 after regulation time.

Goalkeeper Lloyd Morulane was hero for the home team, saving one of the penalties before scoring his own to send the TUT supporters into a frenzy.