Earning a berth in next year’s Varsity Football tournament is the primary objective for the Madibaz men’s football team when they compete in the University Sport South Africa tournament from December 2 to 6.

The USSA week will be held at Wits in Johannesburg and the Nelson Mandela University squad are in the A stream after gaining promotion last year.

The top eight teams from the event will qualify for the prestigious Varsity Football competition next year.

Captain Samuel Connelly said a number of players would have key roles to play at Wits. 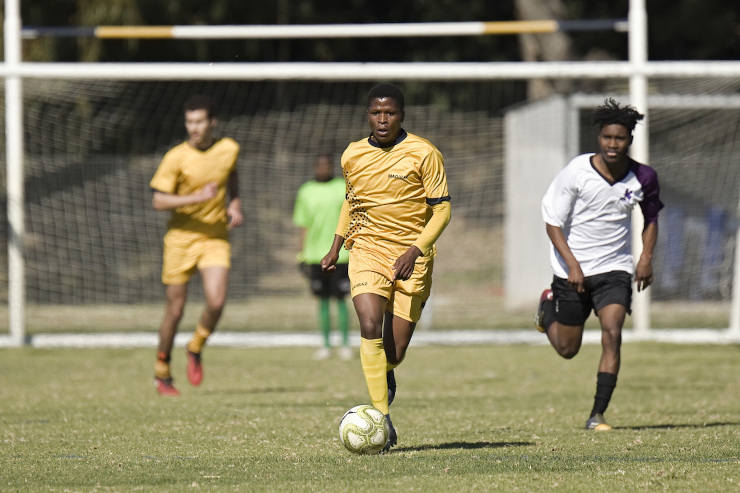 Siwaphiwe Maso [with ball] will have an important role to play for Madibaz when they compete in the University Sport South Africa football tournament at Wits in Johannesburg from December 2 to 6. Photo: Michael Sheehan

“Much is expected from standout player Lubabalo Dimane, who has been in excellent form in the SAB League,” he said.

“In addition, Siwaphiwe Maso, who is still training with Baroka FC [a PSL club], is raring to stamp his mark at the nationals.”

A big plus for them, he added, was having ex-Bafana star Elrio van Heerden on their technical committee.

“His influence on the playing style and individual player performances has shown in the SAB games.

“Furthermore, the Madibaz High Performance Centre is also on board in terms of the player fitness and performance programme.”

The 20 teams competing in the USSA tournament will be divided into four groups. The top two sides in each group will qualify for the top-eight play-offs and the Varsity Football slots for 2020.

The Madibaz women’s team produced their best performance when they finished sixth in the 2010 tournament in Grahamstown.

Captain Ayabulela Ndyebi said they would be looking to at least match that, although they had been drawn in a tough group.

“We will be up against UJ, University of Limpopo, Rhodes and University of Zululand. Johannesburg and Limpopo are among the favourites so we will need to be at our best during the week.”